Observing the Soundplay sessions for the University of Sheffield and Music in the Round has been a real privilege. Not only do I get to coordinate and administrate this wonderful project, but also I get to see the changes in the children week by week as they take part in these music sessions.

It is clear from my observations that the children’s experience of music in these sessions is benefiting them in many ways. Quiet children are now happy to speak and even sing on their own. A child that knew no English at the beginning of the project now joins in fully, interacting with other children, singing loudly and engaging with each activity. Children recognise songs from their actions alone and can dictate a song’s speed, dynamic or feel. Phonics are more widely known and 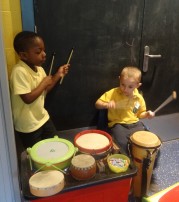 speech is developed through songs, warm-ups and freeplay activities.Lately, more bands have started to be formed during freeplay with the children organising themselves into groups and taking the time to listen to each other play, rather than just grabbing a drum and hitting it as happened at the start of the project. 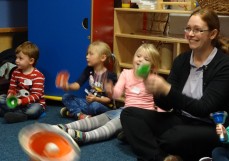 It is not just the children who have benefited. Practitioners within settings who have embraced the project fully have reported feeling much more confident in delivering music and can be seen adapting songs to fit different purposes (tidy-up time, handwashing etc.), singing confidently and enjoying making music with their children. They also see how music can be used to help transform something ‘dull’ like phonics into a fun game or song.

Whilst it would be naïve to claim that all participating children’s development is solely down to our project, differences in the children’s behaviour with each other and with adults during the sessions illuminates just how much this project has succeeded with its primary aim of using music to develop speech and language. Children are chattier with adults and each other; they have taken on the workshop leaders’ actions and phrases, which they then use to direct their friends in bands or games; many now also adapt songs they have learnt in the sessions and make them their own and recordings made of them are clear evidence of their increased confidence with speech and singing. So many more children want to record a song into a dictaphone now than at the start of the project, and the reaction of hearing themselves sing back is priceless.

Being able to witness and record these developments has been wonderful and, I hope, will serve to advocate the value of using music to support learning in Early Years settings.