“This was one of the most exciting evenings I have been to with MitR.”

Many of you will remember our innovative Transformations event at the Showroom Cinema as part of our last May Festival. It was an incredible evening that celebrated two significant centenaries – that of the discovery of stainless steel and that of composer Benjamin Britten – through bringing together film and music in a way that we hope Britten himself could have been proud off.

Since the Sheffield premiere elements of the programme have been touring the country and have been broadcast on the internet. Adrian Wilson and Katie Goodwin‘s collaborative version of Britten’s Six Metamorphoses after Ovid and Charlie Piper’s piece With Stolen Fire for chamber ensemble and film, have reached over 2000 people in over 24 countries – our widest reaching programme to date. 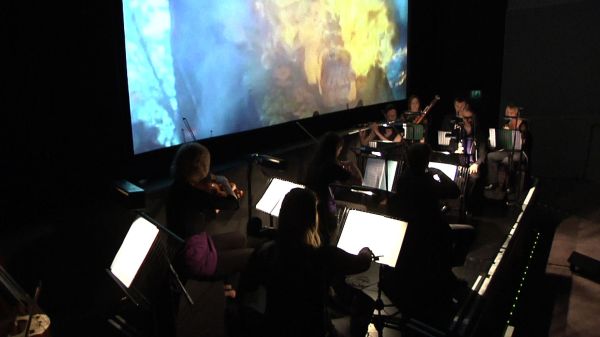 If you’re not one of those 2000 people it’s not too late; there’s still one last chance to see it. The final performance takes place in Penistone Paramount in Barnsley on 4th April at 8pm. It seems only fitting that it returns to its South-Yorkshire home for its grand finale.

For those of you who don’t know Penistone Paramount, it’s a beautiful, traditional two-tier cinema/music hall with a small bar and a kiosk for popcorn and ice-cream – the perfect place to end this incredible tour. It’s on the edge of Barnsley and Sheffield, has its own free car park, ample free on-street parking and is just a very short walk from Penistone railway station. Perfect!

You can book online at www.penistoneparamount.co.uk.

In 1935, the General Post Office (GPO), commissioned a film that looked into the everyday working lives of the coal mining industry – Coal Face. The film looked at the processes used within the industry, and the methods of extraction and treatment of coal. Aside from this, is had the aim of exploiting new methods of sound recording.

The film looks at the structure of the coal industry and the processes used. Coal Face was an important film both for its innovative style and its ability to express critical social comment. 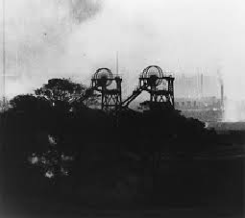 This was the first time that poet W.H. Auden and composer Benjamin Britten worked together, and the result has since been well documented, as ‘one of Britain’s most avant-garde documentary films’ and a long-term collaboration between the two men. At the time Britten was an up-and-coming student at the Royal College of Music.

Music and film is something Britten explored on more than one occasion. Some listeners may be familiar with other works of his, such as ‘Night Mail’, or ‘The Way to the Sea’. As part of the on-going celebrations of Britten’s life, Coal Face is coming to Penistone Paramount next on 4th April.

What more appropriate space than the beautiful surroundings of the Paramount, a traditional two-tiered cinema and music-hall in the heart of coal-mining country. Britten was a great believer in collaboration, bringing together different artforms and communities and taking music out of its traditional setting. In that vain, on 4th April Coal Face will be shown in the good company of some of Britten’s chamber music performed live by Ensemble 360, new film created to go with some of that music and a new piece of music with film written to celebrate a different element of Yorkshire’s industrial heritage; steel. Hopefully Britten would have approved!

The premiere of ‘Transformations’ took place last year in Sheffield’s Showroom Cinema last May and since then, elements of the programme have been on tour across the country.  Due to the success of the event, Music in the Round, the UK’s leading promoter of chamber music outside of London, are bringing it back to its South-Yorkshire home for this final performance – not to be missed.

For more about the event or to book please click here

Listen to some of Britten’s music and find out more about it at www.britten100.org